A fired-up Steph Curry got hot to guide the Warriors to another victory. Plus Lakers fans have let their thoughts be known on LeBron James’ fiery rival.

The Warriors sharpshooter stayed red-hot with 33 points, seven triples, five rebounds, six assists and a season-high six steals to lead his team past the LA Clippers 105-90 on Monday (all times AEDT).

We even saw Curry gets more fired up than usual, losing it at the referees for receiving a no call after drawing contact from Trey Mann while driving to the basket early in the fourth quarter, resulting in a technical foul for the dual MVP.

But it only drove Curry to play harder, scoring 11 of his 33 points after it including three-straight triples to put Golden State’s lead out of reach.

“It was just an accumulation of all types of weird stuff. All that led into where I thought I got a foul,” Curry said post-match.

“It definitely fired me and the team up. After that it was time to direct my energy into putting the ball in the basket.”

After his last three prompting the Clippers to call a time out, Curry gestured a ‘T’ symbol to seemingly mock the ref that gave him a technical.

But Curry wasn’t willing to shed any further light on his celebration.

“You can decide. It‘s open for interpretation,” he said.

Warriors coach Steve Kerr said it was as upset as he’d seen Curry in a long time.

“It seemed to get him going so whatever it takes I guess. He clearly got fouled, Steph is a guy who is just so competitive,” he said.

“When he knows he got fouled — especially in a play like that in open transition when it’s out in the open — and he doesn’t get the call, every now and then he’s going to snap.

“When he knows he‘s right, the competitor in him comes out and he’ll kind of lose his mind a little bit.”

Not for the first time this season Curry was treated to a chorus on ‘MVP’ chants at Staples Centre from ‘away’ fans, while he also received a standing ovation.

And the NBA world on social media again marvelled at his efforts.

The Warriors’ seventh-straight win saw them improve to 18-2 on the season,, while the Clippers fell to 11-9.

Lakers superstar LeBron James and Pistons centre Isaiah Stewart are face off again in a rematch between their teams at Staples Centre.

It comes a week after the pair’s fiery exchange that led to an all-in brawl between both teams in Detroit.

James and Stewart were ejected in the contest and given suspensions, marking just the first ban in James’ career. 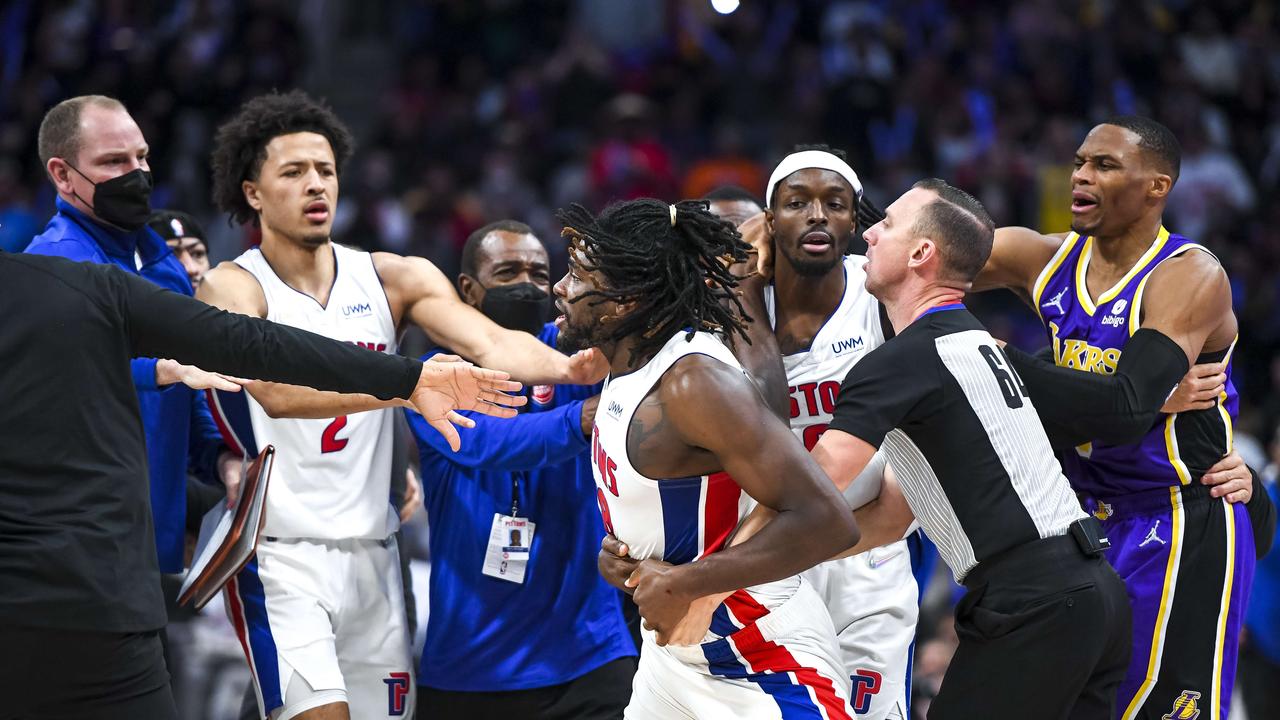 And Lakers fans have let their thoughts on Stewart be known in this one, booing the big man whenever he touches the ball.

The brutal treatment from LA fans was at its loudest and most vocal when Stewart went to the free-throw line in the first quarter.

In a sea-sawing affair, James has played well with 13 points, two triples, three rebounds and three assists, while Anthony Davis has 13 points, one steal and one block.

The Lakers (10-11) will be looking to bounce back from their triple overtime loss to the Sacramento Kings on Saturday, while the Pistons will be hoping to end a five-game losing streak.