Prime Minister Justin Trudeau on Monday invoked emergency powers to disband the truckers and other demonstrators who have clogged streets in the Canadian capital of Ottawa and blocked border crossings elsewhere to protest COVID-19 restrictions.

In invoking Canada’s Emergencies Act, which gives the federal government broad powers to restore order, Trudeau ruled out using the military and said the action would be limited in time and targeted to the trouble spots.

“It is no longer a lawful protest at a disagreement over government policy. It is now an illegal occupation. It’s time for people to go home,” said Trudeau, whose government has been criticized for being slow and not forceful enough in responding to the crisis.

In addition to threatening to tow away the truckers’ rigs, the government outlined plans to freeze their personal and corporate bank accounts and to suspend the insurance on their vehicles.

“Consider yourselves warned. Send your rigs home,” said Deputy Prime Minister Chrystia Freeland, who doubles as the finance minister and added that the government would target crowd-funding sites that are being used to support the illegal blockades.

In a related development earlier Monday, the Royal Canadian Mounted Police said it arrested 11 people at the blockaded border crossing at Coutts, Alberta, opposite Montana, after learning of a cache of guns and ammunition.

Police said a small group within the protest was said to have a “willingness to use force against the police if any attempts were made to disrupt the blockade.” Authorities seized long guns, handguns, body armor and a large quantity of ammunition.

The protest in Ottawa, now in its third week, has spurred on similar movements in other parts of the country that have blockaded various U.S.-Canadian border crossings. Most prominent among them was the critical Ambassador Bridge connecting Windsor, Ontario, to Detroit, which was under a nearly week-long siege that disrupted auto production in both countries.

That trucker-led “Freedom Convoy” was finally disbanded over the weekend after a judge on Friday ordered the blockade. About a dozen protesters who defied the order were arrested Sunday when the last vehicles blocking the bridge were towed away.

“Today, our national economic crisis at the Ambassador Bridge came to an end,” said Drew Dilkens, the mayor of Windsor.

Authorities in protest-weary Ontario said the province will lift its COVID-19 proof-of-vaccination requirements in two weeks. Ontario Premier Doug Ford said the decision was not a result of the protests, but rather because “it is safe to do so.” 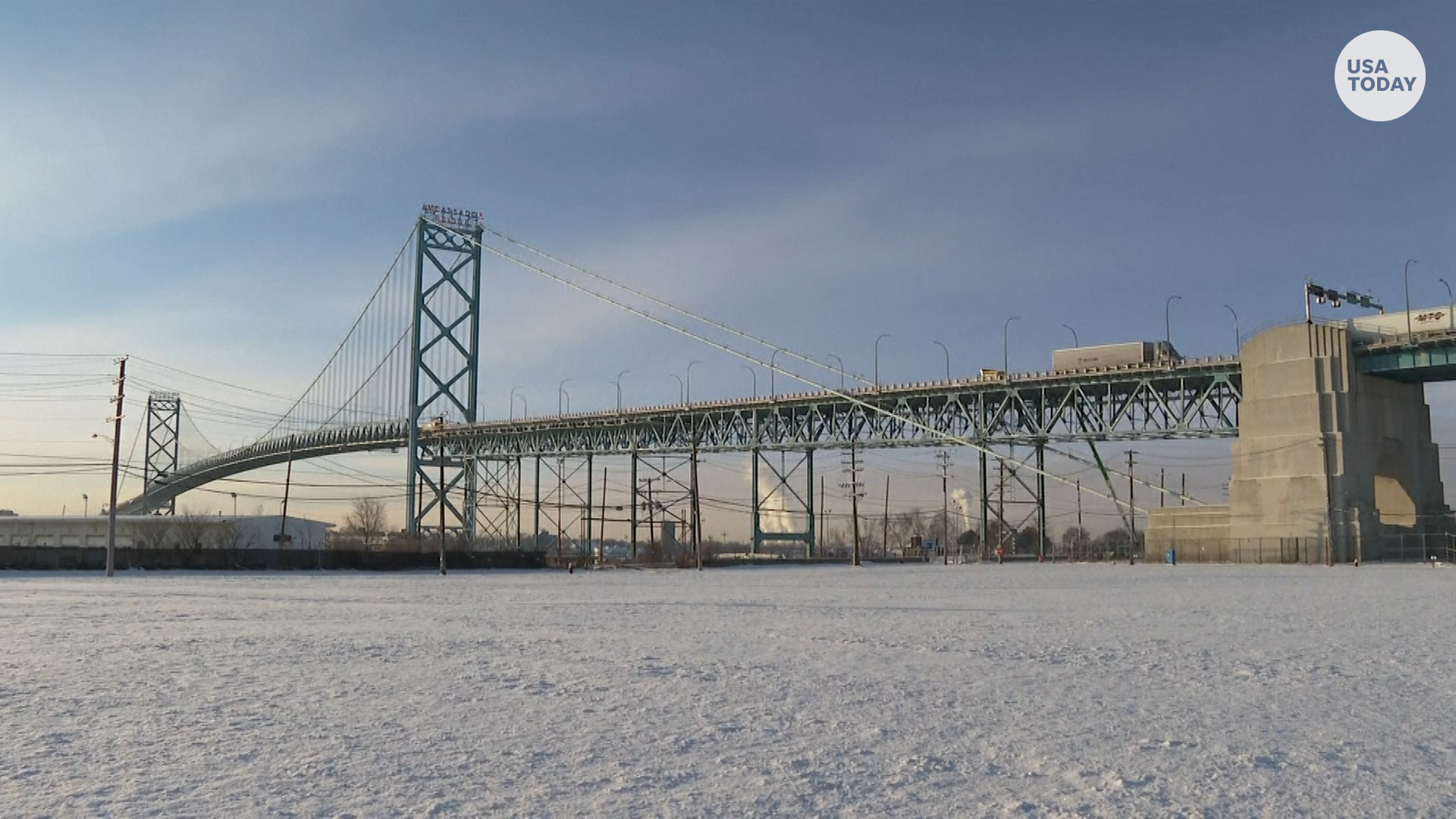 Also in the news:

►New York City fired 1,430 workers who failed to comply with its COVID-19 vaccine mandate, the mayor’s office said Monday. The total represents less than 1% of the 370,000-person city workforce.

►California will delay until Feb. 28 a decision on whether to lift mask mandates in schools.

View more: Classic Antonio Conte quote may be trouble for Cristiano Ronaldo if he gets Man Utd job

►Massachusetts Gov. Charlie Baker has signed a $101 million supplemental budget to boost coronavirus testing across the state, provide masks in a variety of settings and allocate additional funding for a COVID-19 emergency paid sick leave program.

►Walmart will no longer require fully vaccinated workers to wear masks while working in stores unless mandated by local or state rules.

📈Today’s numbers: The U.S. has recorded more than 77.9 million confirmed COVID-19 cases and more than 922,000 deaths, according to Johns Hopkins University data. Global totals: More than 413 million cases and over 5.8 million deaths. More than 213.8 million Americans – 64.4% – are fully vaccinated, according to the Centers for Disease Control and Prevention.

📘What we’re reading: What’s it like to be stuck in COVID isolation during the Olympics? Bobsledder Elana Meyers Taylor explains how quarantine was her biggest foe in the games.

Keep refreshing this page for the latest news. Want more? Sign up for USA TODAY’s free Coronavirus Watch newsletter to receive updates directly to your inbox and join our Facebook group.

California’s mask mandate for indoor public settings will be lifted Wednesday. Several celebrities jumped the gun and ditched them Sunday at the Super Bowl.

The likes of NBA icons LeBron James and Magic Johnson and showbiz figures Jennifer Lopez, Ben Affleck, Jay-Z, Charlize Theron, Sean Penn, Chris Tucker and Matt Damon were among the well-known figures seen on camera without a mask at SoFi Stadium in the Los Angeles area, where everyone age 2 and older was supposed to wear a mask when not eating or drinking.

Luminaries were far from the only ones eschewing the facial coverings. Even though KN95 masks were handed out to fans attending the NFL’s championship game, bare faces could be easily spotted throughout the crowd.

But celebrities naturally draw the most attention – and outrage in these instances. Social media was replete with comments about their lack of compliance with the rules, including this one from a Twitter user:

“My students all have to wear masks all day tomorrow, inside and outside of their classrooms because we are in LA County. Same place as the Super Bowl. But not a mask in sight here.”

Hong Kong will begin vaccinating children as young as 3 years old to combat a record surge of infections, authorities said Monday. The decision came days after the death of a 4-year old who tested positive there. In the U.S., the minimum age for vaccination is 5.

Hong Kong confirmed a record 2,071 new coronavirus cases Monday, the most in a single day since the pandemic began. That number could more than double Tuesday as another 4,500 people tested preliminary-positive.

The city’s medical and quarantine capacity has been overloaded, forcing hospitals to reserve isolation wards for children, the elderly, and patients with serious symptoms, the Hong Kong Free Press reported.

At rural hospitals struggling with a staffing shortage, administrators are grappling with vaccine opposition in the face of a new requirement.

Federal COVID vaccination mandates go into effect nationwide this week for hospital and nursing home workers, some of whom are turning to religious exemptions to avoid getting the shots, and receiving a large number of approvals.

At Cody Regional Health in Wyoming, about 200 of the 620 staffers have asked for religious exemptions and most have been granted. At Scotland County Hospital in Missouri, about 25% of the 145 employees remain unvaccinated and 30 of them have received exemptions.

“We’re not going to have a Spanish inquisition with Torquemada deciding if your religious exemption is granted or not by the Grand Inquisitor,” said Dr. Randy Tobler, CEO of Scotland County Hospital. “For people that want to judge what we’re doing in rural America, I’d love them to come and walk in our shoes for a little while, just come and sit in the desk and try to staff the place.”

Missouri woman makes it back after a month on life support

A Missouri woman has survived a 108-day odyssey with the coronavirus that included two rounds of double pneumonia, four instances of her lungs collapsing, a bleeding ulcer, septic shock, hemorrhagic shock, an induced coma and 34 days on a life-support machine.

When Janie Pendergraft went into acute respiratory failure, conventional medical intervention had already been exhausted. At 65, she was at the top of the age range for a comeback from life support, but because she was otherwise healthy her medical team hoped for a good outcome. Today, she is quick to praise her care at Mercy Springfield, her family’s support, the cards and prayers of friends.

Gov. Phil Murphy’s requirement that workers in high-risk settings get the COVID-19 vaccine – and a booster shot, when they’re eligible – survived a legal challenge Friday when a state appellate court dismissed a bid by New Jersey’s largest police union to block the mandate.

In a 34-page opinion, a panel of three judges brushed aside the New Jersey Policemen’s Benevolent Association’s claim that Murphy overstepped his bounds when he declared last month that certain workers in crowded, high-risk environments such as hospitals and prisons – including about 11,000 county and state corrections officers – must get vaccinated or risk losing their jobs.

The executive order “represents a rational and measured response to our present circumstances,” the judges wrote, adding that they found no merit in any of the PBA’s arguments.