How TV Shows Grappled With the Pandemic in 2021

How TV Shows Grappled With the Pandemic in 2021

Though realism and relatable characters are qualities often praised in TV shows, most of us don’t actually want our entertainment to feel too much like real life. That’s become more true than ever over the past 18 months, as Covid-19 has curtailed our social lives, saturated our routines with anxiety, and pushed most people into a state of deep pandemic fatigue. No event in recent history has reshaped the world quite so profoundly, and so it’s no surprise that pop culture is still grappling with how to address it. On the one hand, nobody wants to tune in to pandemic content. On the other hand, does it at some point become distracting if TV doesn’t acknowledge that the world has changed?

Early in last year’s lockdown, when movie and TV production had ground to a total halt along with most of society, the distinction was simple: there were shows made in the Before Times, and then there were pandemic-specific shows like Netflix’s Social Distance and Freeform’s Love in the Time of Corona, produced entirely using remote technology. It was easy to opt in or out of these shows, and based on the lukewarm critical reception to both, many opted out.

As Hollywood slowly came back to life after the months-long standstill, a debate started to emerge among viewers and creators alike—should returning shows acknowledge the pandemic? At that time, the overwhelming sentiment seemed to be “Absolutely not.” We were already depressed and drained, missing our friends, families and normal routines, turning to entertainment for comfort. If the world had changed beyond recognition, at least TV could stay the same. 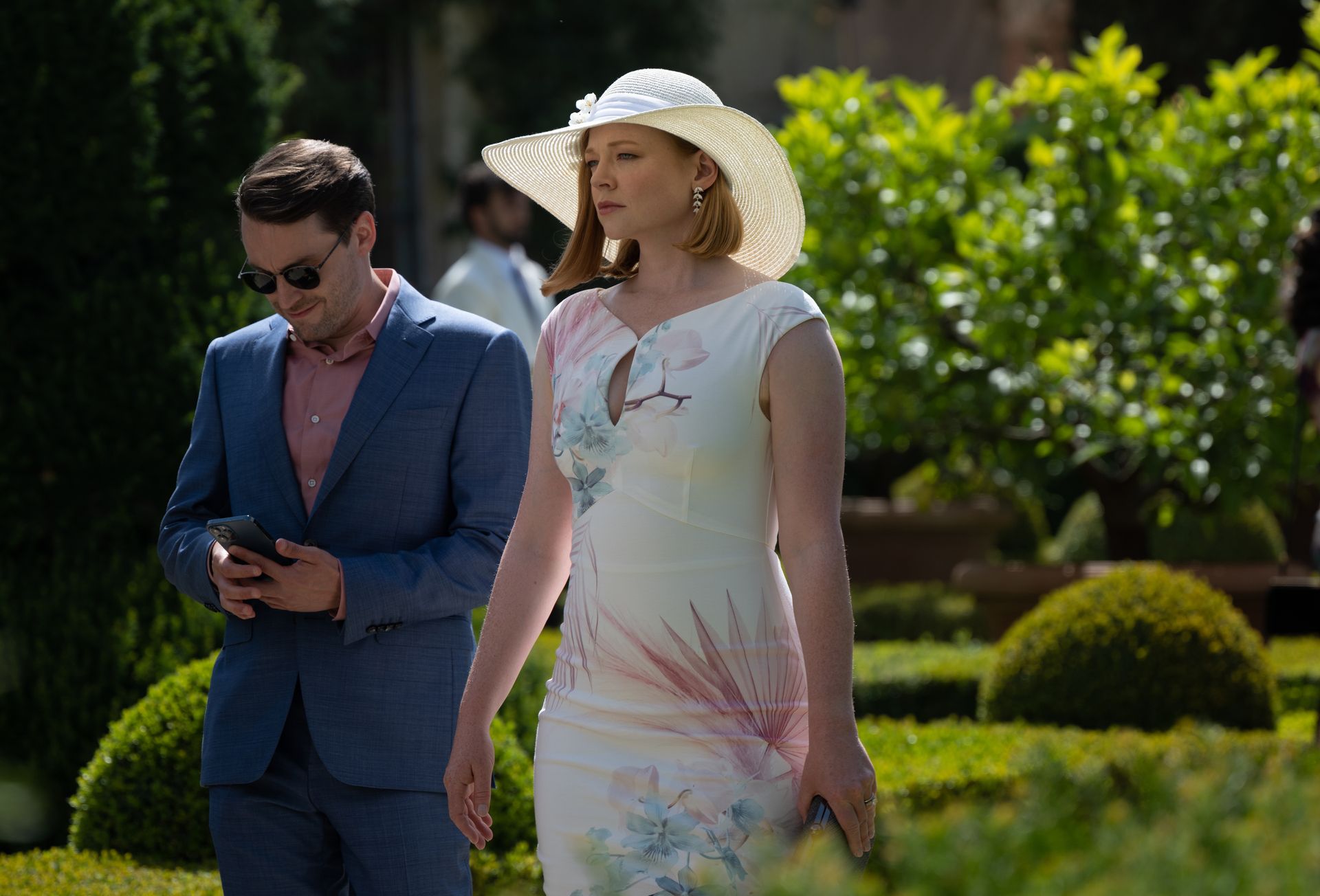 There was nary a mask in sight the latest season of Succession.
Graeme Hunter

This was easier for some shows than others. HBO’s Succession, for example, has always been set in a kind of alternate reality that closely mirrors the real world, but maintains some key differences including a fictional president. This approach, along with the show’s ambiguous timeline (it’s unclear how much time has actually passed onscreen since the 2018 pilot) made it easy for season three to ignore the pandemic altogether. Similarly, Apple TV+’s Ted Lasso, though it was a quarantine hit, exists in a suspended reality that allowed for a blissfully pandemic-free second season.

In contrast, The Morning Show, also on Apple TV+, entirely retooled its sophomore season to incorporate the pandemic, but set its episodes in the first three months of 2020, the last gasp of normalcy. That timing means that Covid is largely treated as a minor news story, and a shadow looming over the show’s soapy proceedings rather than a present danger. None of these solipsistic characters have any idea that a virus outbreak in Wuhan, China is about to upend their worlds, and aside from a brief, truncated storyline where Daniel (Desean Terry) is dispatched to Wuhan to report on the situation there, the writers never had to engage much with the pandemic until the finale, when a major character becomes seriously ill with the virus. 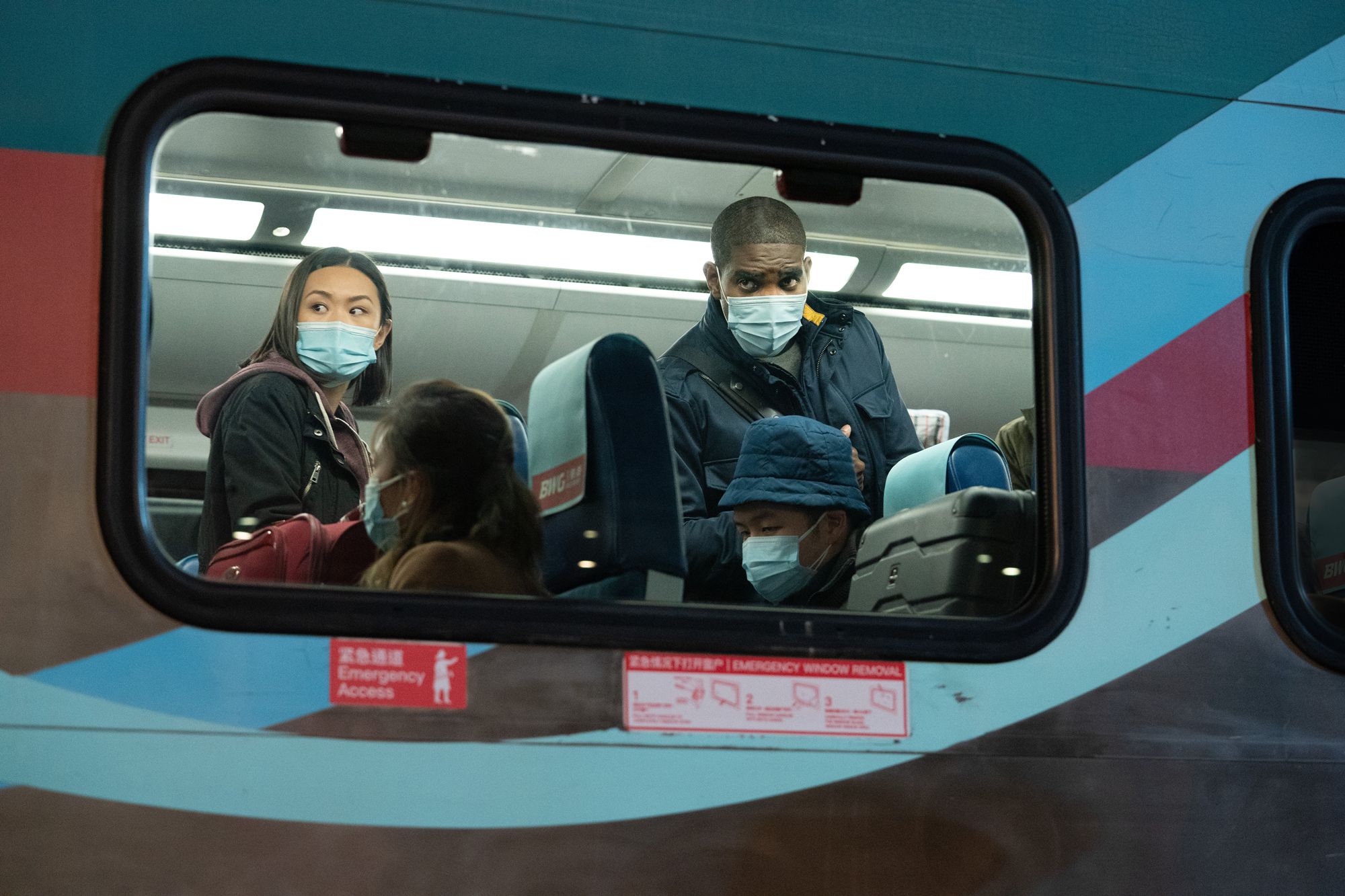 The second season of Apple TV+’s The Morning Show captured the early days of the coronavirus pandemic.
Erin Simkin

Other shows took the reverse approach, setting their new seasons entirely in a post-Covid world. In season three of Netflix’s You, Penn Badgley’s wryly sociopathic narrator makes a couple of glancing references to the pandemic, noting that his neighbor, an influential mommy blogger, had to publicly apologize after hosting a party in the summer of 2020 “while the rest of us were home clutching hand sanitizer.” But that pandemic summer has clearly come and gone, and there’s no sign of masks or social distancing in the fictional Bay Area suburb where the season takes place.

HBO Max’s The Sex Lives of College Girls and Gossip Girl both made similar decisions, referencing the pandemic firmly in the past tense. “There’s a couple jokes and lines that acknowledge that Covid occurred,” Sex Lives of College Girls showrunner Justin Noble said at the Television Critics Association press tour in summer, “but we are being an optimistic production saying that in this future year, it’s all gone. It’s a faint memory. We got through it.” 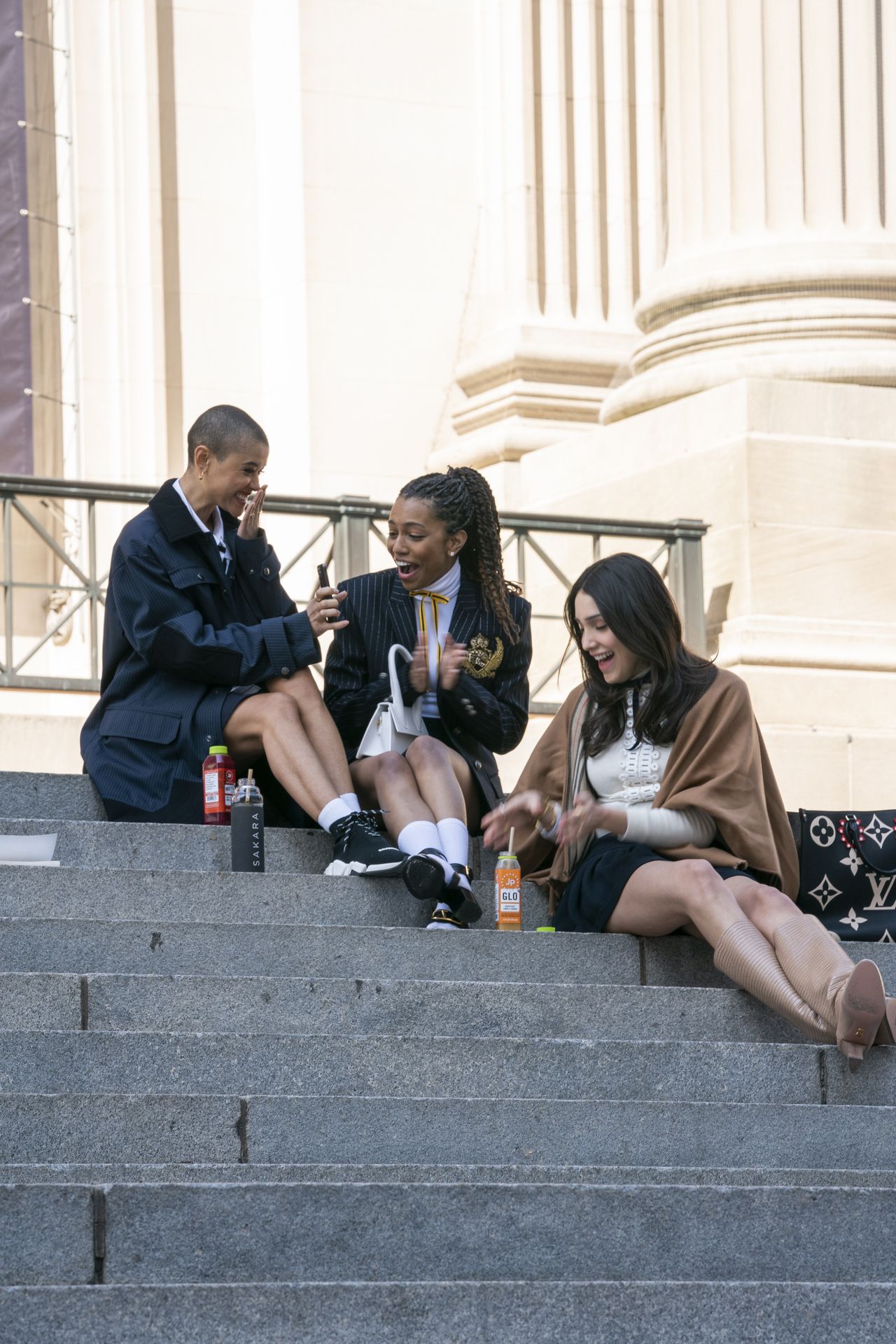 The Gossip Girl reboot exists in a post-pandemic world, unlike the one viewers live in.
HBO Max

Other shows did tackle Covid at the start of their new seasons, but gradually phased it out by their finales. Apple TV+’s Mythic Quest aired a deservedly acclaimed quarantine episode last spring which saw its characters grappling with isolation, but moved past the pandemic in its second season. “We felt that people would be kind of sick of talking about it and living in the experience, and they would want to look in their rearview mirror at Covid,” creator Rob McElhenney told Variety.

Grey’s Anatomy initially tackled the pandemic in a more full-throated way than perhaps any other show, centering an entire season around the devastating impact of Covid-19 on medical workers. Season 17, which showrunner Krista Vernoff and lead actress Ellen Pompeo dedicated to health care professionals, finds Pompeo’s Meredith Grey fighting for her life on a ventilator, comatose after contracting the virus during her work on the front lines. But even a medical drama like Grey’s can only sustain so much pandemic storytelling, and so in the current 18th season, Covid is in the past.

Nearly two years into the pandemic, it’s becoming increasingly clear that a “post-Covid world” may never exist in reality. Experts now widely predict that eradicating the virus that causes Covid-19 is not realistic, and that the virus is instead likely to become endemic—meaning it’ll stick around, but will pose less of a threat over time. Mask-wearing in public spaces, regular booster shots, and a certain degree of uncertainty around travel are likely here to stay. So will there come a point when pop culture has to depict Covid-19 not as a finite event, but as part of our permanent reality? 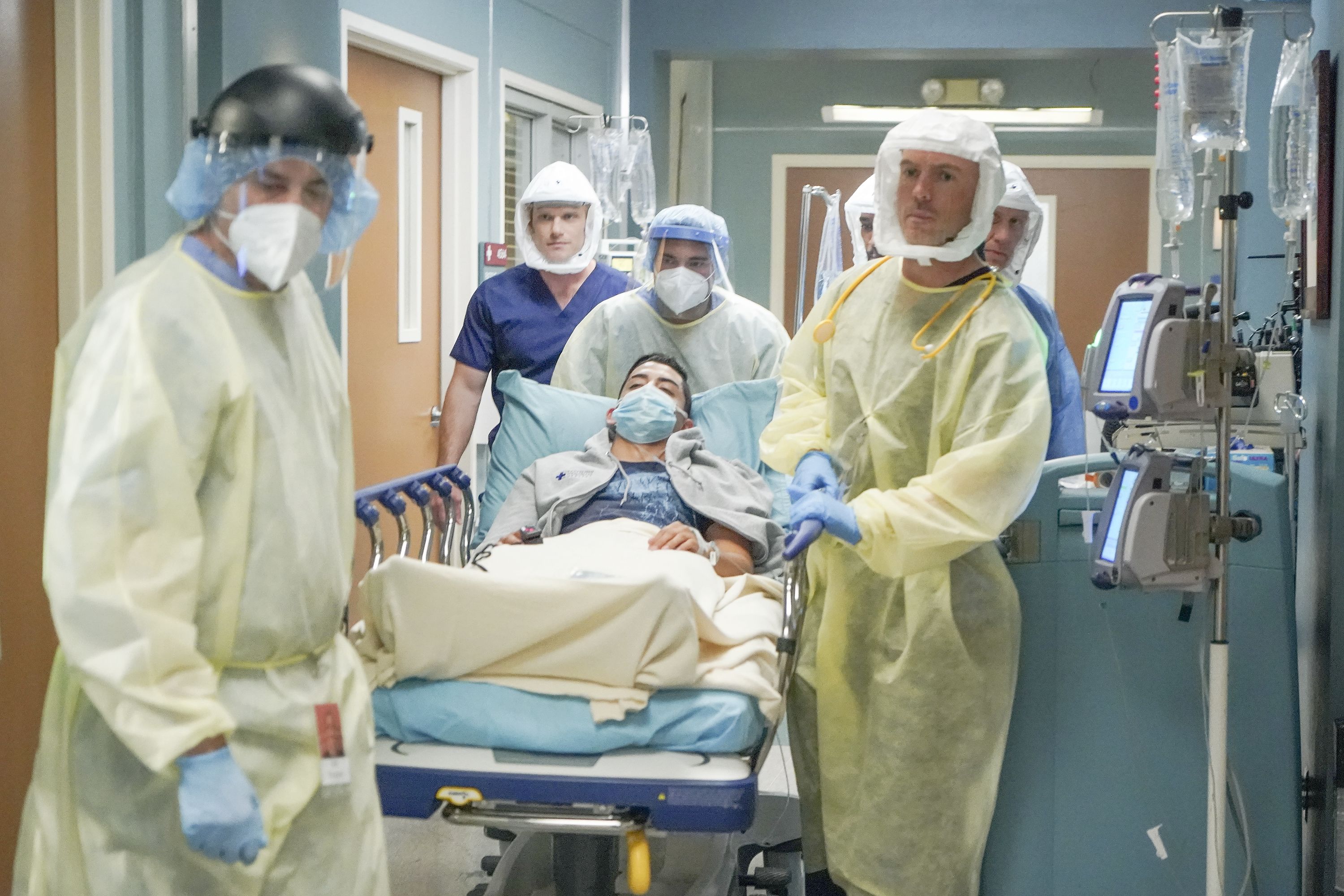 In season 17 of Grey’s Anatomy, nearly every storyline was impacted by the Covid-19, but in season 18, the pandemic is in the rear-view.
Richard CartwrightGetty Images

Creators are starting to acknowledge the disconnect. Episodes of Grey’s are now bookended by the following disclaimer: “This season, Grey’s Anatomy portrays a fictional, post-pandemic world which represents our hopes for the future. In real life, the pandemic is still ravaging the medical community.” It’s a moving, even heartbreaking, statement, highlighting the gulf between that optimistic fictional world and our reality.

That escapist approach—putting Covid in the rearview mirror—may be essential for storytellers. Maybe the vast majority of TV will soon take place in an alternate reality, where Covid-19 either never existed, or had a clear beginning, middle, and end.

TV is enjoyable because it’s built around structured arcs. In a given episode or season there’s typically an inciting incident, a series of dramatic escalations and crises, and a climax. Obstacles are fought, overcome or not, and there’s always some kind of resolution. It wouldn’t be enjoyable to watch characters run up against the same intractable problem again and again, occasionally hoping that they’d overcome it, only to end up back in limbo each time. There is nothing narratively satisfying about our new pandemic normal. So maybe putting Covid in the rearview mirror is the only way for pop culture to cope. If we never get the triumphant, unambiguous return to normal we all once hoped for, at least we can watch it on TV.

Emma Dibdin Emma Dibdin is a freelance writer based in Los Angeles who writes about culture, mental health, and true crime. This content is created and maintained by a third party, and imported onto this page to help users provide their email addresses. You may be able to find more information about this and similar content at daypg.com