What is the Japanese Word for Fox? And What Do They Say?

What is the Japanese Word for Fox? And What Do They Say?

But what is the Japanese word for fox? I mean, who cares about dragons and tigers when there are foxes to talk about, right?!

Right! And that’s exactly what you’ll learn here today. And of course, there is more than just one word for it too!

Personally, I’ve always thought that foxes looked really cool. They are not quite the same as dogs, and in fact have a lot in common with cats, such as they way that they hunt and kill their prey.

And I have to admit that the Pokémon Ninetails was always one of my personal favorites in the original games. But the Japanese love foxes even more than I do!

There are TONS of Japanese legends and folklore about foxes, and even the massively popular Kawaii-Metal band BABYMETAL works for “The Fox God”. Why is it like this? Well… only the Fox God knows!

The Japanese word for fox is 狐 (kitsune). This kanji is made by combining the kanji for “dog” 犬 and the kanji for “melon” 瓜 together into a new kanji.

As you can see below, when the kanji for dog 犬 is used as a radical (as part of a new kanji) its shape gets changed to fit into the left side of the square.

I tried to look up the etymology of this kanji to see if I could find out the reason why there’s a melon in there. But unfortunately I couldn’t find it. I mean, I get why they used the kanji for dog. But do foxes love to eat melons or something??? I don’t know. ¯_(ಠ_ಠ)_/¯

So if you happen to know why, please let me know in the comments below!

The kanji 狐 means “fox” in general, but it is usually used as a reference to the red fox, also known as “Vulpes vulpes” (I guess that’s where Vulpex gets its name!).

Sometimes you’ll see the word for fox written in katakana as キツネ instead of in kanji. So keep that in mind when reading Japanese, as you may come across it.

And there is also a loan word (gairaigo) for “fox”, but it is a lot less common to see than the native version of the word. The gairaigo for it is: フォックス (fokkusu). That one’s easy to remember if you speak English.

Compounds that use the 狐 kanji:

The Fox’s Role in Mythology

In the Japanese mythology of foxes, they are considered intelligent beings with magical abilities such as shape shifting. They are portrayed in many roles, but the trickster is perhaps the most well known one.

Sometimes they would lead travelers astray with illusions, and other times they would shape shift into a beautiful woman in order to trick men and steal from them. Foxes would also sometimes even possess people.

It was believed that they could live for hundreds of years, gaining more and more power as they got older.

And as they would age, they would grow additional tails until they were finally 1,000 years old and grew their ninth and final tail. At this point their fur would change to a white or golden color and they would change into a “heavenly/celestial fox” 天狐 (tenko) and could ascend into heaven.

Or you could just use a Fire Stone. I’m just saying!

These “nine-tailed foxes” where known as 九尾の狐 (kyuubi no kitsune) and would gain immense power and wisdom.

Maybe you’ve seen the massively popular anime Naruto? He had the nine-tailed fox sealed inside of him as a baby and it granted him incredible power when the seal was cracked or broken. But the nine-tailed fox in that show was a total baddie and would wreck your face!

What Does the Fox Say?

Well actually, they don’t “say” anything. They bark and screech, which is terrifying to hear at night if you don’t know what it is. The first time I heard it, I thought somebody was being murdered!

In Japanese, the word for “to bark” is 鳴く (naku) and the onomatopoeia for the sound of a fox barking/yipping is コンコン (kon kon).

Unfortunately, you can’t really have a fox as a pet. I looked into it once, and they are feral creatures all the way down to their genes. If you got one as a baby and raised it yourself, it would still act like a wild animal throughout its whole life.

However, you can buy a very special breed of fox that has been bred over dozens and dozen of years to weed out that wildness. But I think they cost like, $10,000 or so and you have to buy them in Russia.

Oh well… what can you do, right?

#1 Glossika: Get 50% off any subscription plans, for life! 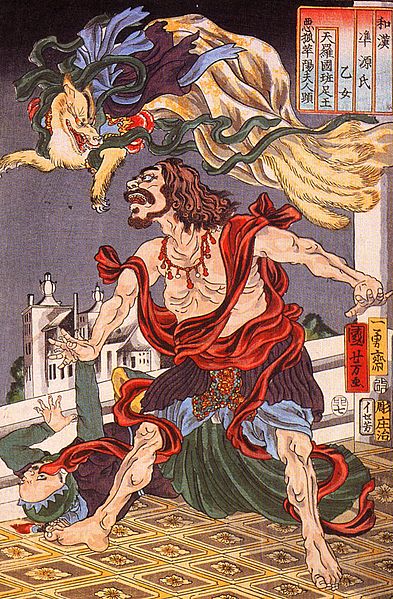