There might be slight differences here and there, but most NBA players have a common list of goals: Win a championship, make a couple of All-Star or All-NBA teams, maximize earning potential. The usual. 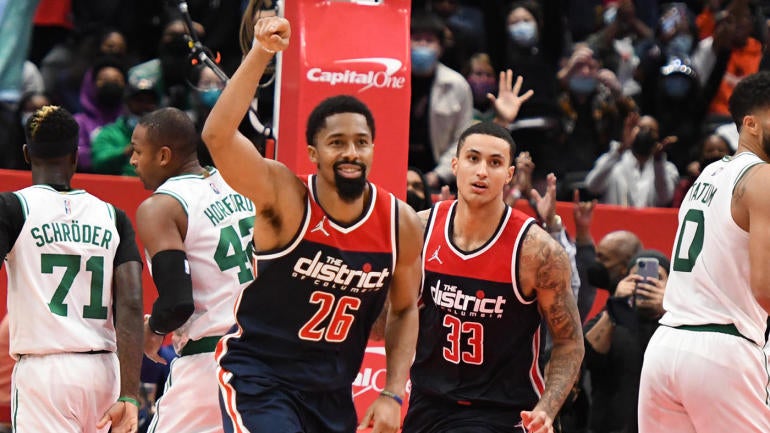 Known for his progressive, outside-the-box off-court investments — like when he attempted to use his contract with the Brooklyn Nets as a digital investment vehicle, before being rebuffed by the league — Washington Wizards guard Spencer Dinwiddie is thinking bigger.

“I guess if I wanted to set like a super-lofty goal, I’d love to be the youngest Black self-made billionaire,” Dinwiddie told CBS Sports in a video interview. “I mean, that would be dope.”

Though Los Angeles Lakers forward LeBron James cracked the $1 billion mark in career earnings earlier this year, his net worth was estimated by Forbes to be only around $850 million. Dinwiddie, 28, speculated that 36-year-old James will likely reach the 10-figure club soon, at which point the clock will begin to tick.

“He’s probably gonna be [a billionaire] before 40, so he’ll still be the youngest,” Dinwiddie said. “So I got 12 years to beat him. … Anything’s possible.”

In addition to his myriad investments and the four businesses he’s started, including the cryptocurrency app, Calaxy, Dinwiddie’s quest toward being a billionaire was pushed along by the three-year, $54 million contract he signed with the Washington Wizards this offseason. The deal would be a boon for most professional athletes, but it was even more significant for Dinwiddie since he was only seven months removed from surgery to repair a torn ACL in his right knee. He made a notably speedy recovery, even suggesting that he could have played for his former Nets in the postseason, less than six months after his surgery, if they would have advanced to the NBA Finals.

Dinwiddie, who successfully recovered from a devastating knee injury during his junior year at Colorado, once again attacked his rehab with relentless work ethic and determination. He also had the help of Breinfuel, a functional beverage made up of natural caffeine and antioxidants, of which Dinwiddie is an equity investor.

“Shoot, I came back from ACL in 5 1/2 months, and part of that is pulling 12-hour days,” Dinwiddie told CBS Sports. “Going from workout to workout, needing to stay focused, needing a little kick in the ass sometimes. Obviously Breinfuel has helped provide me with that.”

So far Diwniddie has shown absolutely no signs of rust for the Wizards, who have surprised the basketball masses by racing out to a 9-3 start, best in the Eastern Conference. Washington’s early success has been unexpected, considering that four of the team’s top five minutes leaders — Dinwiddie, Kyle Kuzma, Montrezl Harrell and Kentavious Caldwell-Pope — weren’t even on the roster last season.

Dinwiddie has averaged 16.1 points, 5.7 assists and 5.5 rebounds so far this season, making him the only player in the NBA to put up at least 16-5-5 in fewer than 30 minutes per game. He’s done his best to find his role with his new team, but has also taken advantage of extra opportunity when available. Washington’s leading scorer, Bradley Beal, has missed two games this season, during which Dinwiddie has averaged 28.5 points, 8.5 rebounds and 7.5 assists on 9-of-18 3-point shooting. Most importantly, the Wizards won both games.

“To me it starts with Spencer Dinwiddie,” WNBA player and ESPN NBA analyst Chiney Ogwumike said of the Wizards’ hot start during an appearance on The Lowe Post podcast. “The dedication he has had to his recovery is a testament to how well he’s performing right now, and being that perfect complementary piece.”

As well as Washington has played to start the season, sparked by the league’s fourth-best defense, Dinwiddie feels the team is just starting to crack the surface of its potential.

“I think the chemistry for a group that doesn’t know each other has been great. But for a team that would know each other? It’s been meh,” Dinwiddie told CBS Sports. “That’s where we’ve got to do better, and we will over time. I mean, it’s just part of the process. I’m looking forward to seeing the team come together, guys getting healthy. We’ve been a little banged up, obviously we’re still missing some pieces. The level that we can reach, I think, is pretty high.”

Ogwumike also noted that she’s gotten to know Dinwiddie, and that their friendship began with — what else — an investment opportunity. She’s one of a handful of athletes that Dinwidde has spoken with about his off-court moneymakers, particularly the cryptocurrency and NFT space, which can be particularly difficult to understand for the unacclimated.

Dinwiddie has been happy to lend a helping hand, given his relative experience in the area.

“I’ve been in this space four or five years now, so it was definitely early, and now with there being a little bit more of a bull market, and obviously the NFTs being the craze right now, some guys have reached out and had some conversations,” Dinwiddie told CBS Sports.” They’re just now dipping a toe in though, so there’s still a massive education process to go through. Being in crypto is like dog years, so I feel like I’ve been in the space for like 20-30 years already and it’s only been four or five. They’ve only been in this space for four or five months, so there’s just gonna be a consistent growth process overall for everybody.”

Juggling all of his off-court opportunities while remaining unflinchingly dedicated to basketball hasn’t been easy, Dinwiddie admitted, and there are ebbs and flows when his focus leans more toward one or the other. During the season, he’s obviously not as involved in his investments as he is in the offseason, so it’s important, Dinwiddie said, to partner with companies with good leadership, whose vision and values align with his.

Dinwiddie’s goals for the season include staying healthy, with the help of Breinfuel, helping get the Wizards to the playoffs and continuing to invest in companies while growing his own ventures. Asked whether he would like his eventual biography or autobiography to focus more on his basketball or non-basketball achievements, Dinwiddie said he doesn’t necessarily make the distinction.

“I think I would want the main highlights to be my mind, my core philosophies and the way that I approached everything. Because that’ll set the stage, whether it’s on the court or off the court, for anybody that’s reading the book and trying to draw inspiration,” Dinwiddie told CBS Sports. “I approach it very similarly. I want things to make sense. I want to try to be one percent better. I want to align with people that have similar values and similar expertise. Those are agnostic to on the court or off the court.

“I feel like it’s allowed me to have patience, but also persevere and work extremely hard in both fields, surround myself with people that are better than me at certain things and reach a certain level of success.”