The highlights this week: Argentina’s midterm election results show the pitfalls of Russian vaccine diplomacy, a Uruguayan writer wins the Cervantes Prize, and how the next pandemic could start in the Brazilian Amazon.

If you would like to receive Latin America Brief in your inbox every Friday, please sign up here.

The Rocket That Fizzled

Argentina’s ruling Peronist coalition performed poorly in last weekend’s midterm election, losing its Senate majority for the first time since 1983. The big-tent leftist political movement has been a key organizing force in Argentine politics since the first presidential administration of its namesake, Juan Perón, in the 1940s.

Many pandemic-related factors contributed to this outcome. Argentina is experiencing a sluggish economic recovery, with year-on-year inflation at over 50 percent. President Alberto Fernández and top government officials were also involved in scandals this year—breaking pandemic distancing requirements and cutting the line for COVID-19 vaccines, respectively—that prompted public outcry.

Another, more geopolitical reason for the Peronist coalition’s drop in popularity was a delay in distributing COVID-19 vaccines after Fernández overwhelmingly relied on orders of Russia’s Sputnik V shot to inoculate Argentines.

Unhappy with Pfizer’s demands in a negotiation over a possible vaccine purchase—Fernández said the company aimed to violate Argentina’s “sovereignty”—the president embraced Sputnik V. His vice president, Cristina Fernández de Kirchner, has a history of close relationships in Moscow and was active in negotiations to buy the vaccine despite skepticism from some Argentine scientists over early experimental data.

Meawhile, Gamaleya, the Russian state lab that produced Sputnik V, was touting the jab as an accessible solution for developing countries that had been pushed aside by rich Western ones in the race to vaccinate their populations. The Fernández government acted as a kind of broker for Sputnik V’s entry into Latin America, overseeing Spanish translations of documents needed for the shot’s approval and sharing them with governments in the region.

In February, when a peer-reviewed study found Sputnik V was 91.6 percent effective and deliveries had already arrived in Argentina and Bolivia, it looked like a diplomatic win for both Moscow and Buenos Aires—especially since U.S. vaccine donations would arrive much later, in June.

But Argentina today offers a portrait of how Russian vaccine diplomacy in Latin America has faltered despite its early start.

First, Sputnik V was plagued by delivery delays. Though initial shipments of the vaccine arrived in Latin America on schedule, by July, lags in delivering second doses held up vaccination schedules from Bolivia to Paraguay to Venezuela.

Argentina experienced its highest daily death tolls of the entire pandemic in a brutal second wave of the coronavirus in June, when fewer than 10 percent of Argentines had been fully vaccinated. That month, 59.1 percent of Argentines told pollsters that they believed the government’s political decisions were the decisive factor in the country’s elevated number of COVID-19 deaths.

In July, a Fernández aide threatened to pull the plug on the government’s entire Sputnik V contract, and Fernández signed a contract with Pfizer after having resisted doing so for a year. By August, the Argentine government resorted to inoculating people who had received one Sputnik V jab with second doses made by AstraZeneca and Moderna. And by early November, Argentina had ordered more than four times as many vaccine doses from manufacturers other than Gamaleya as it had ordered of Sputnik V, according to the Americas Society/Council of the Americas.

Now, as the world attempts to return to a modicum of pre-pandemic life, another problem is emerging. Gamaleya’s apparent failure to provide adequate documents for Sputnik V’s emergency approval at the World Health Organization (WHO) is blocking Argentines from traveling to countries that require travelers to have been inoculated with WHO-approved vaccines. People vaccinated with Sputnik V are now shut out of the United States and much of the European Union. Fernández himself appealed to WHO on Sputnik V’s behalf in late October, but the organization has not given any signal that approval is imminent.

As proof of its efficacy, Sputnik V’s backers point to data about its successful use in countries from Argentina to the United Arab Emirates, where coronavirus cases and deaths have fallen. The jab has certainly played an important role in saving lives as the pandemic continues, but as a diplomatic effort, Sputnik V’s delivery delays and regulatory hurdles have caused problems that set Russia’s vaccine diplomacy apart from that of China or the United States.

Even so, access to Sputnik V did not improve Latin Americans’ trust in Russia, a working paper by five Columbia University researchers found. They carried out surveys in six Latin American countries of vaccine-hesitant people who eventually got inoculated, measuring their level of trust in the country that manufactured the shot before and after receiving it. As of May 2021, participants’ trust in China and the United States had improved after receiving shots manufactured in those countries. That was not the case for Russia, where opinions were unaffected.

So while Sputnik V has achieved its goal of quelling the pandemic, its geopolitical aims appear to have backfired—both on its origin country and in at least one other, Argentina, which embraced it.

Friday, Nov. 19: U.S. Ambassador to Mexico Ken Salazar gives an address at the Atlantic Council on the future of the U.S.-Mexico relationship.

Piñera escapes impeachment. An eleventh-hour attempt to impeach conservative Chilean President Sebastián Piñera failed in the country’s Senate this week after being approved in its lower house, the Chamber of Deputies. The charge, linked to revelations from the Pandora Papers leak, alleged that Piñera benefited from his regulatory authority as president in a decision to sell a mining company.

While no candidate from Piñera’s political coalition is among the front-runners in this weekend’s presidential election, a candidate further to the right, José Antonio Kast, is expected to make it to the runoff next month against leftist Gabriel Boric.

Cuba’s repression apparatus. After nationwide protests took the Cuban regime by surprise in July, authorities preempted anti-government protests planned for Nov. 15 by detaining many prominent organizers. Security forces surrounded many of their homes, blocking would-be protesters and journalists from exiting. 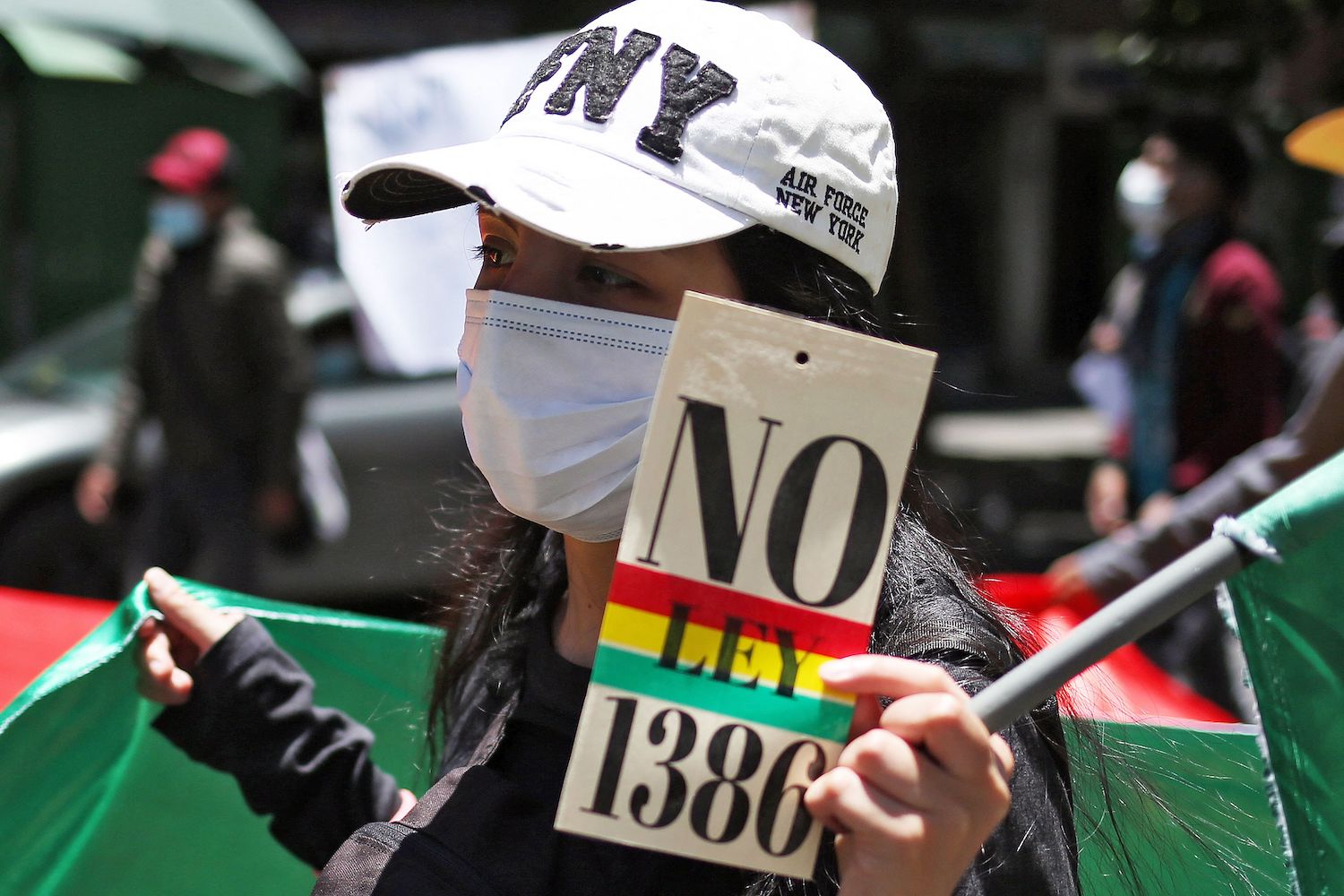 A woman takes part in a demonstration against Bolivian President Luis Arce and a new law under debate in parliament that the opposition alleges would allow the government to investigate the assets of any citizen without a court order in La Paz, Bolivia, on Nov. 8.

Some observers said the protests were the country’s largest since former President Evo Morales stepped down in 2019. They also coincided with Arce’s one-year anniversary in office.

Uruguayan literary star. Uruguayan writer Cristina Peri Rossi, who is 80, won this year’s Cervantes Prize for best body of work in the Spanish language. Awarded by Spain’s government, the Cervantes Prize is sometimes called the “Nobel Prize” of Spanish literature.

Rossi moved to Spain during Uruguay’s 1973-1985 dictatorship and has embraced political themes in her writing. She is known for her short stories, which explore themes of gender and sexuality, as well as her experimentation with poetry formats amid prose.

Question of the Week

The qualifiers for the 2022 World Cup in Qatar are underway, and Brazil and Argentina are the first two South American countries to have each secured a berth.

Which national team is trailing right behind them in the rankings?

Five teams from Conmebol, the South American division of global international soccer, will go on to Qatar. Notably, Uruguay, which has been a regional star in past years, may not end up making the cut.

In Focus: The Deforestation-Disease Link 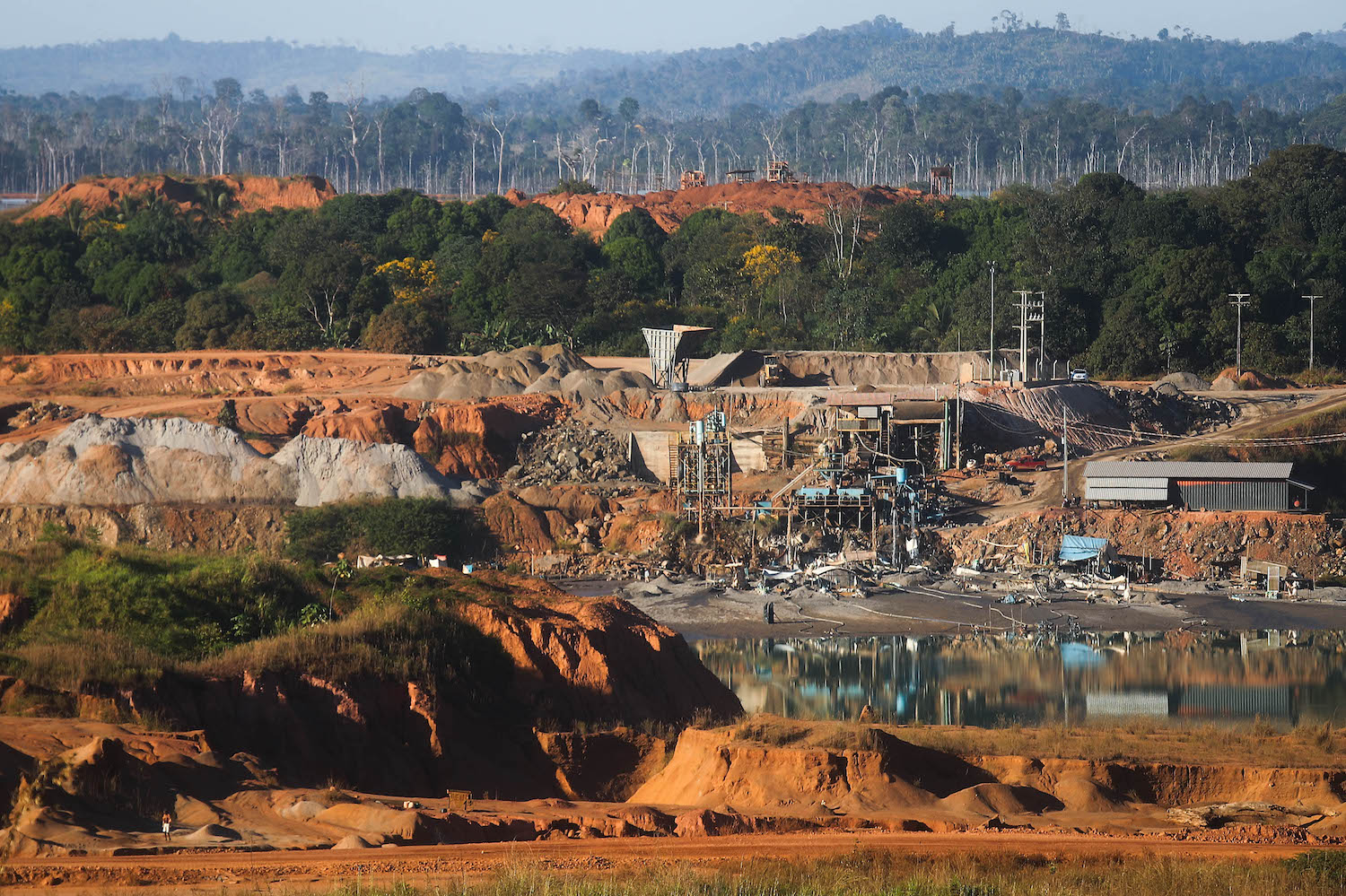 Amazon soil sits in the foreground at the Bom Futuro open-air tin mine, one of the largest tin mines in the world, in a deforested section of the Amazon in Bom Futuro, Brazil, on June 27, daypg.com Tama/Getty Images

This year’s U.N. Climate Change Conference in Glasgow, Scotland, saw countries make fresh promises about protecting their rainforests. While doing so is essential to staving off global temperature rise, scientists say it also may be critical to preventing the next pandemic. That’s because new contact between humans and animals that occurs on the frontiers of deforestation creates more opportunities for viruses that were preciously contained in the forest to jump to people.

Scientists have traced around a third of all known infectious disease outbreaks in humans to rapid land use change, the Los Angeles Times reports. Much has been debated about the Amazon’s “tipping point”—the amount of deforestation at which it will cease to become rainforest and turn into a drier savannah—but Emory researcher Thomas Gillespie told the newspaper that people should also be concerned about a disease tipping point: the amount of forest loss that makes viruses far more likely to spread. Gillespie estimates it lies at around 40 percent. Some 17 percent of the Amazon is already gone.

Ongoing studies at the Evandro Chagas Institute in the Brazilian city of Belém have identified around 220 different types of viruses in the Amazon, 15 of which have the potential to cause pandemics, researcher Adalberto Luís Val of Brazil’s National Institute for Research in the Amazon told Reuters last year.

At the Oswaldo Cruz Foundation, a research institute in the Amazonian metropolis of Manaus, researcher Felipe Naveca is looking into the possibility that the Mayaro virus, which causes flu-like symptoms and has been detected in Latin America but is not well-tracked by governments, could cause a large-scale outbreak. Laboratory experiments show two common types of mosquitos can spread the disease, Science reported.

Naveca points to the spread of the Zika virus as instructive. Zika circulated largely unnoticed among humans for decades before causing an epidemic in Latin America in 2015 that has since been linked to birth defects in children. There is value in studying seemingly obscure pathogens, he said, because “we can fight better the enemies we know better.”

David Quammen, a science writer who has written books on the start of pandemics, says it’s surprising the world has not yet seen a lethal virus that originated in the Amazon rainforest given its high rate of deforestation.

But “the fact that we haven’t had one until now doesn’t mean that we won’t have one,” Quammen told InfoAmazonia. “It could happen at any moment.”